There are 23 designated Historic Landmarks in the city. Also on the National Register of Historic Places are: Jordan Ranch, Sedona Ranger Station and Pumphouse, Hart Store, and the Chapel of the Holy Cross.

The criteria for designation is listed in the Land Development Code § 8.7, Historic Preservation Procedures.

A detailed summary of each landmark is available in the Historic Landmarks Inventory.

The following are either publicly accessible or commercial buildings visible from the street. 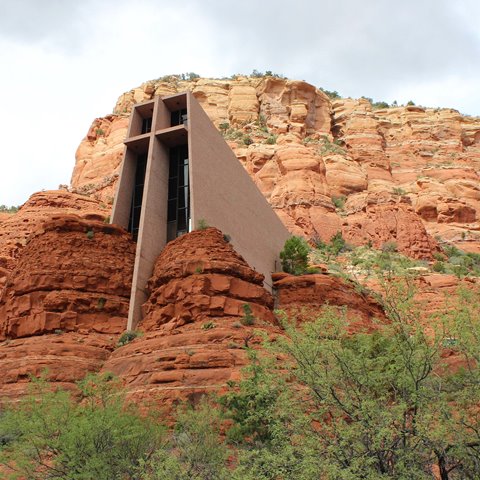 Chapel of the Holy Cross, 1956,  780 Chapel Road, National Register
The Chapel is owned and maintained by the Roman Catholic Diocese of Phoenix and St. John Vianney Catholic Church of Sedona and is located on leased U.S. Forest Service land. Open to the public.

Cook Cemetery, 1918, 115 Airport Road
First used circa 1918, and established as a formal cemetery by Henry Cook in 1930. Sedona Schnebly and her family are buried here along with other pioneer families including Brewer, Cook, Hedges, Parker, Pirtle, Purtymun, Smith, Thomas and Van Deren. 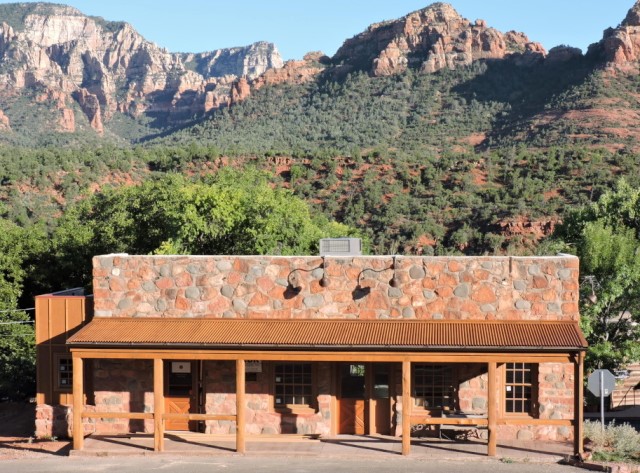 Pumphouse, USFS, 1935, 251 SR 179, National Register
Constructed by the Civilian Conservation Corps to serve the Ranger Station, Hart ranch and others.

Pushmataha Building, 1957 or 1960, 360 Brewer Road
Built in the Old-West style for a museum and named after a Choctaw Chief. Now offices for Keep Sedona Beautiful (not open to public).

Ranger Station, 1917/1934, 250 Brewer Road, National Register
The house was home and office for Forest Service rangers (1917). The barn was built by the Civilian Conservation Corps in 1934. Now owned by the city, with plans for a future park site. Not open to the public at this time.

The following are privately owned homes, or on private property.

Bennett-Purtyman Cabin, 1922, Kachina Drive.
Cabin built by Marvin Bennett on his Grasshopper Flat homestead and moved in 1963 when the Harmony Hills subdivision was built. Now located at the Sedona Charter School..

Da Voss-Hawley House, 1940s, 100 El Camino Grande
One of the first homes in this part of Grasshopper Flat and is built with indigenous materials.

Doodlebug Ranch, 1936, 10 Ranch House Circle
This land was homesteaded in the late 1800’s by the Chavez family and then by Ira Owenby. The ranch house was built with local river rock in a low, rambling ranch-style form. Tony and Marguerite Staude acquired the ranch in 1941 (Marguerite commissioned the Chapel of the Holy Cross).

Madole House-Pony Soldier, 1962, 130 Pony Soldier Road
Designed by Howard Madole, and one of the first built in the Sedona West subdivision and was featured in their marketing.

Nininger House, 1959-60, 39 Meteor Drive
Designed by Howard Madole and was one of the first homes built in the Oak Creek Knolls subdivision.

Owenby Ditch, c. 1880s-early 1900s, multiple
Frank and Nancy Owenby were the first settlers to patent a homestead in Sedona and began work on the Owenby Ditch in 1893. Nine individual properties have been landmarked and the ditch is active. The Owenby Ditch Association was founded in 1904.

Saddlerock Ranch, c. 1950, 255 Rockridge Drive
Movie stars and directors stayed at Ellinger's Saddlerock Ranch during the filming of many 1940s and 1950s Westerns.

Williamson House, 1953 or 1955, 340 Smith Road
One of the first homes built in the “Sedona Subdivision” developed by Earl and Leah Van Deren and recognized as Sedona’s first subdivision.